The Heart Behind The Task

I’ve had this on my heart for a time, so here we go…

Communication is becoming so fast, so real time in our age- with Skype, SMS (txt), and email – it’s not uncommon now to receive text messages from my clients instead of e-mail.  It definitely has it’s benefits, and I welcome those, as with any accepted technology, it quickly has become part of how we all interact. Can there be too much of a good thing?

I generally reserve text for super-time critical messages, since in most cases, a text is an interruption to someones space, and it carries with it an expectation of a fairly speedy answer, so I save those interruptions for the near emergencies. E-Mail is something that generally you check on schedule of your choosing, so that’s my main form of communication. But I get texts from individuals frequently, that were not emergencies in any way – they were just a fast response to a thought by that person, and so they sent  a text to get the thought off of their plate as soon as possible (or before it is forgotten.)

But have you noticed something else happening?

Hi Bryan, how are you? Do you have a moment?

Rarely – it usually starts right into task. I call it “the endless conversation.” I may not have received a text from someone for weeks, yet the person will start the message with:

I’m fairly certain that folks are not intentionally being rude to each other, but I do believe we are missing something. Lets say you are walking down the street, and you see someone you know, and you realize that you need something from them. Do you just walk up and say, “{insert task here…}?” That would be socially odd if you did, as one usually allocates at least a sentence or two to check in, and acknowledge the human behind the task.

Hmm… maybe not. We may have just uncovered what’s behind this – how do you view those you interact with? Are they simply a method to execute a task, or are they a living, breathing human being with a heart, someone you care for?  How about in your emails – do you include a salutation? If not, that’s akin to just walking away from someone in person when you are done with them.

I’m guessing this is something you may need to sort out for yourself. And in fact, it may not have even been something that warranted attention in your life – your communication world may have just taken on a “It’s what you do” sort-of position.

I get that, but keep reading, you might want to give it some thought.

When I was a young teen, my mother gave me a “Grumpy Smurf” along with the wise words of, “your choice…” That shook me up, and caused me to introspect. It was her way of saying that I wasn’t really giving tho 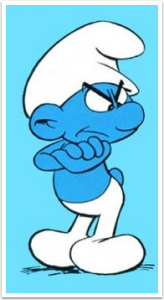 se around me the time of day, that I had become very focused on me, and through my interactions with people it was clear who I thought they were there to serve. That marked a (slow, long) turning point in my life – a point where I chose to try to live “other’s-centered.” I fail at this regularly, but over the years I have become much better at it. And it’s become more of who I am, and it’s caused me to think differently about interaction.

I’ve worked to shift my thinking from considering people simply as tasks that I am forced through life to interact with, and instead to think of them as living, breathing human beings that I have the privilege to interact with. Is that the truth all of the time? I’d be lying if I said so.. but I will say this – the longer I think this way, I seem to encounter less exceptions to this rule. Hmm…

It is really a shift in thinking – a different paradigm. The task or function that you need from someone else becomes secondary to truly checking in with them, and making them feel important – at least more important than what you need from them. Don’t get me wrong – in text, I may simply show this by respecting their time: “Hi Bryan, got a min?” may be the txt greeting. Takes all of about 10 seconds to type, but to many it communicates that they are important, that I have a request, but I want to make sure they have time. I’ll begin an e-mail thread the same way, something like “Hi Bryan, hope you are well.” And I always hand type a salutation at the end of every message. Having “Thanks.” in your signature line can seem fairly un-authentic – I type the salutation a little differently each time – it keeps it real.

Is this behavior received by everyone the same way? No. Do I do this in emergencies? Not usually. Does it have an overall effect on the majority of the people I interact with? Sure does. But even more than that, it keeps me cognizant of the most important things in our world – others, and the relationships we get to have with them. If we lose that, in my humble opinion, we’ve pretty much lost it all.